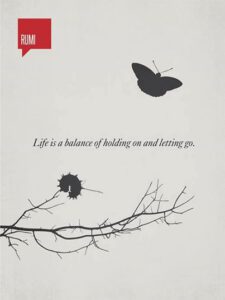 It is also displaced anxiety. Displacement is a defence mechanism where, not wanting to experience our original reason for being anxious, we substitute some other object or action. We don’t even do this consciously.

This is how someone who is very anxious could end up putting all their energy into cleaning. Obsessive cleaning is someone’s way of acknowledging that something needs to be cleaned up but it is actually the unfinished business of the original anxiety that needs to be cleaned out.

So, no matter how much someone cleans, the original anxiety remains. Not only that, it gets worse with time. It snowballs as it’s being neglected. All the energy goes into cleaning, which is the classic displacement, and none goes into healing the original reason for the anxiety.

So much time has passed, it can be we have forgotten the original reason for the anxiety. We have lost track of ourselves and, from this, people can often feel lost in their lives.

Psychotherapy/counselling is particularly effective for obsessive compulsive disorder ocd. In our sessions we would track back to the original anxiety and begin to give it a voice.

As the anxiety finds its voice, the anxiety itself goes down as it is finally getting the attention it needs. The anxious part of us finally feels safe enough to look at why he/she is anxious and, often times, it is never as bad as originally thought.

What made it worse was the ignoring of it.